At this year’s ORLA Convention, Emile Gourieux with STR presented “The State of the Oregon Hotel Industry”. Markets covered in the report included:

The following chart shows Occupancy and ADR (YTD August 2018) for the above mentioned primary markets in Oregon, with Portland and the Bend / Redmond area leading the state: 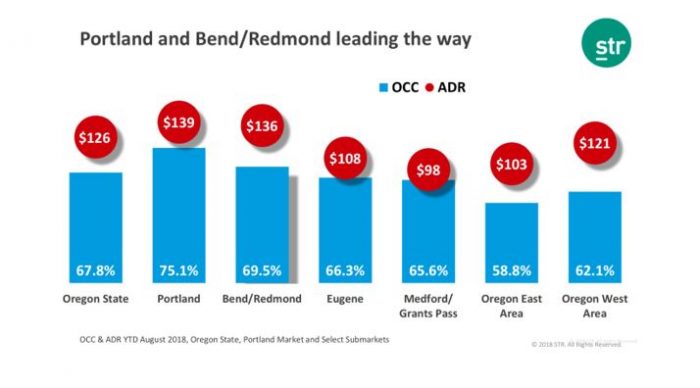 Here is the RevPAR (YTD August 2018) for these markets (please note the RevPAR Composition is almost completely dependent on rate growth as % change in Occupancy for all markets (except the Oregon East Area) was negative.

The following chart shows Occupancy and ADR (YTD August 2018) for the above mentioned sub markets in Portland, with Portland CBD in the lead: 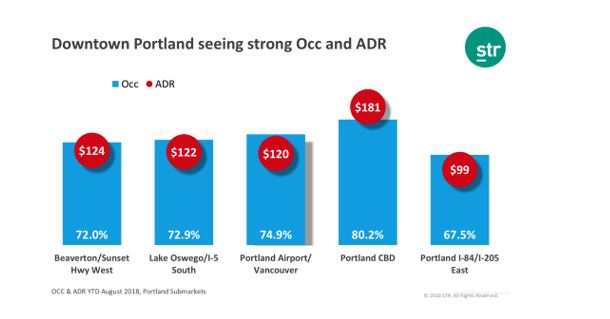 Here is the RevPAR (YTD August 2018) for the Portland sub markets with Portland CBD well ahead in RevPAR as well:

Looking at Day of the Week Occupancy, Saturday comes out on top at 79.1 %, showing that Leisure travel is dominant in the Portland market. However, weekdays are the money-makers with Tuesday and Wednesday leading the rest with ADR averaging $144 for both days.

As for the Portland Market Pipeline, the heaviest supply growth is still to come with a total of 5,729 rooms still in the Construction / Planning phases.

Another interesting slide that was presented shows the ideal % Occupancy for maximum % GOP at the different levels of hotel class (nationally): 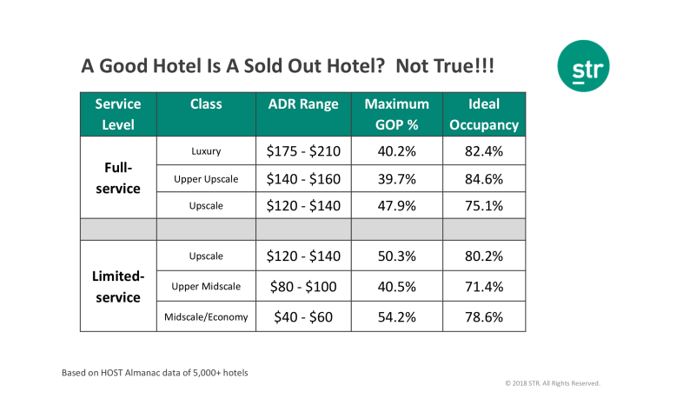 Thank you for another great event! For more info about the presentation, please contact Brian Resendez (503) 577-7710.

Our experience with Brian Resendez from SVN Hotels was excellent. Brian not only went the extra mile to make sure we got this deal done, he also gave us honest advice. The process from start to finish was one of the smoothest experiences we have had with an acquisition. I hope to have the opportunity work with Brian and his team on future deals.

Brian and Michelle did an outstanding job selling Bonneville Hot Springs Resort for us. We had requested that our property sale be done in a completely confidential manner so it did not interrupt our daily flow of business. They created beautiful collateral that represented our property very well and kept it current and complete. They made themselves available to tour the property for all interested parties in a non-invasive manner so we could continue to do business without neither guests nor staff being aware of the property being for sale. We would recommend Brian Resendez as a superbly competent realtor to anyone interested in selling their commercial property.

After researching and interviewing several leading NW hospitality brokers, it was very clear to us that Brian Resendez was the best choice.  Marketing a partial interest in a unique hospitality property presented an unusually challenging situation for any veteran broker.  Brian’s experience, creativity, hard work, patience and personal care led to a successful outcome for all parties.  We highly recommend Brian Resendez and his capable team.

Brian is an outstanding Broker. He is diligent in his service to his clients, and he takes his responsibilities seriously. His connections are very deep in the hospitality industry. Not only does he seem to know everyone, even better, everyone seems to know him. I have won direct business through having Brian introduce me to one of his connections. Now that person is a client our ours as well. Brian is the kind of Broker, and the kind of person, with whom I enjoy doing business.

It was a great pleasure and experience to work with Brian for our very first property purchase. At times negotiations with the sellers were challenging, but we always found Brian to be super-responsive, professional, and helpful. His office was prompt to communicate with sellers, follow-up with third parties, put together additional documentation, or dig up information. Anything that was needed to keep the ball rolling- Brian and Michelle were on it.

We highly recommend their service, and it will be a pleasure for us to work with Brian and his team when we get our next opportunity.

My experience with Brian Resendez was nothing short of professional. We had a challenging year long transaction and he completely kept me and the process on track and got us all to the finish line. Brian was always a wealth of information above and beyond what was expected.  Thank you Brian!

I appreciate your service, continued support and marketing effort that you have made on the Redwood Hotel project in Grants Pass, OR. The brochure and marketing information that you have compiled for this property is excellent. I look forward to extending our business relationship.

Very difficult deal – estate (foreign beneficiary) and three buyers. Best way to describe it is:  “Maze”. But we made it. Brian was instrumental in bringing it together.